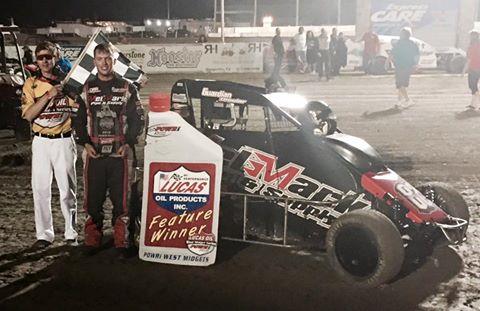 Crandall, TX | June 24, 2016; A debut that has been long awaited for the Lucas Oil POWRi West Midget Series at RPM Speedway proved to be better than expected. 17 cars signed in for competition at the fast 1/4 mile speedway, and proceeded to put on an excellent show for the massive crowd in attendance.

Two action packed heat races would be won by Steven Shebester and Grady Chandler, with the Integrity Customs High point award going to Shebester. At intermission a fan was chosen from the stands to roll the dice, and with a fist bump of good luck the dice would land on a 4 inverting the nights top 4 in passing points.

2015 points champion and rookie of the year Anton Hernandez would start on the pole with Grady Chandler along side. The drop of the green flag would see Chandler make a big move jumping out to the early lead. Steven Shebester, Hernandez, Andrew Deal, would closely battle behind the 72 of Chandler. Lap after lap the top three of Chandler, Shebester, and Hernandez would distance themselves from the field. Shebester and Chandler would duel for several laps before Shebester would finally get a run off turn four taking the lead from Chandler.

As Shebester began to catch lapped traffic the nights only caution would fly for Andrew Deal who had engine failure in turns 3 and 4 with 21 laps completed. With 4 to go on the restart Shebester would set sail to victory. Grady Chandler would finish 2nd and with a monster move Ryan Hall would cross the stripe in 3rd.

Back to News
Driver Registration